Exploring the Adventure of Aging

The Power of a Grateful Heart–The Perseverance Factor

We are surrounded by a great cloud of people whose lives tell us what faith means. So let us run the race that is before us and never give up. We should remove from our lives anything that would get in the way and the sin that so easily holds us back. Let us look only to Jesus, the One who began our faith and who makes it perfect. He suffered death on the cross. But he accepted the shame as if it were nothing because of the joy that God put before him. And now he is sitting at the right side of God’s throne. Think about Jesus’ example. He held on while wicked people were doing evil things to him. So do not get tired and stop trying. (Hebrews 12:1-3 NCV) 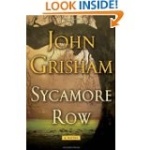 I completed reading John Grisham’s latest book SYCAMORE ROW yesterday afternoon. In case you do not know, it is a sequel to his very first book, A TIME TO KILL, which until this summer I had not read. I can recommend both, although be prepared the beginning of his first book, if you have not read it, is so graphic it left me in tears and chills. I do not intend to review the books here so read them if you would like.

As I began to think about being thankful for the growth of perseverance in my life, I could not help but include a scene from SYCAMORE ROW. In the episode, Harry Rex, lawyer and friend of Jake Brigance senses that Jake is about to give it up. The odds of a win being astronomically low, he reminds Jake who he is.

From Sycamore Row by John Grisham:

“No, I remember when you were quarterback for scrawny little Karraway, never had a winning season, as I recall. What was the worst a..-whipping you ever took on the field?”
“Ripley beat us fifty to nothing my junior year.”
“How bad was it at halftime?”
“Thirty-six to nothing.”
“And did you quit?”
“No, I was the quarterback.”
“Okay, you knew you were not going to win at halftime, but you led the team back onto the field for the second half, and you kept playing. You didn’t quit them and you can’t quit now. A win looks pretty doubtful at this time, but you gotta drag your a.. back onto the field. Right now you look thoroughly defeated and the jury is watching every move you make. Eat your vegetables like a good boy and let’s go.”

The gift of perseverance does not ever guarantee that the outcome even when you are RIGHT will be victory. However, I understand now more than I ever did before that quitting in the face of defeat guarantees a loss. And, not just a loss in that moment but a setback that makes the courage to persevere in the next arena of life even harder. As Vince Lombardi once said:

“Once you learn to quit, it becomes a habit.”

So I thank God for the opportunities he has given me to muddle, push, force, or drag through. No one, at least no one in their right mind, gets down on their knees and prays , “Oh, Lord, I don’t have enough trouble, trials, or hardships. Send me more.” What I pray is, “Lord, I cannot do this by myself. Stay with me, help me and if possible take these trials away from me.” My example in this is Jesus in the Garden of Gethsemane when he prayed, “If possible, take this cup from me.” Then he rose met his accusers and went to the Cross. Each day as a Christian, we are called to take up our cross and follow him.

Jesus faced not only the excruciating physical abuse of the cross, he faced and persevered through the spiritual anguish of being separated from the Father. Because of His perseverance on the Cross, you and I have the promise that He “will never leave” us or “forsake” us. In the valleys, the mountaintops, and the plateaus of our lives he is present. He has taken up residence in our very beings and will not abandon us no matter what…even if I quit, he won’t quit.

So I thank God for His perseverance in my life and for teaching me daily how much he loves me and wants me to continue to serve Him until He takes me home.So in the words of Harry Rex, that great theologian (NOT): “Eat your vegetables like a good boy and let’s go.” Thank you John Grisham for another wonderful book.